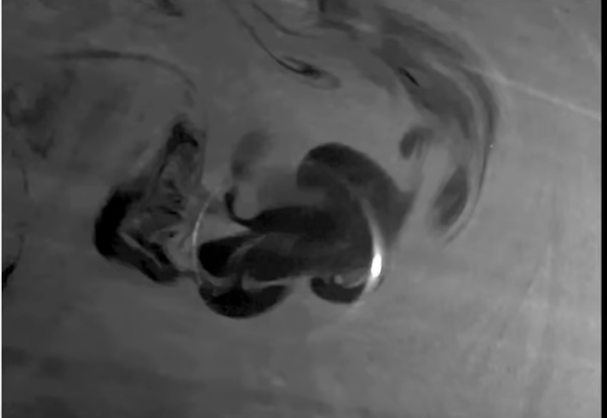 Several national and international performing arts education organizations are combining resources to study the effects of COVID-19 aerosol transmission in performing arts performance settings. This group has released two preliminary reports because interest is so high, but the studies are still ongoing, and have not been peer reviewed.

Following is my understanding of the latest results, specifically as they apply to oboe players. This preliminary study shows that the oboe emits greater concentrations of aerosols than other instruments tested, and greater concentrations than actors and singers. [btw, the illustration above shows an aerosol plume emitted from the bell of an oboe.] These results will be tested further, and may change. But in this study, the concentration of particles (per cubic centimeter) emitted from the oboe bell were in a range from 3-6, much higher than any other instrument. A singer peaked at about 1.4, and an actor at 1. A trombone peaked at about 0.7, and at the bell of a euphonium concentrations were measured at 1.5. By comparison, “the coronavirus has been measured at 0.1 micron.” With a bell cover, the concentrations for oboe were much lower, in a range similar to a clarinet with a bell cover. Note that both with and without a bell cover, the oboe disperses significantly more aerosols than the flute (again, more testing of both instruments is planned, since these results differ from those of other studies).

According to one of the researchers, the bell cover for oboe “cuts the momentum” of the plume, but the single layer bell cover does NOT absorb many of the aerosols. The material for the bell cover used in this experiment is described as an “80 denier bell cover.” They are “exploring other mask materials” which they hope will cut aerosols more significantly. At this point, it is suggested bell covers be made with more than one layer of a non-stretchy material. Bell covers should be made of a material similar to those used for face masks, and include a similar MERV13 filter material inside the bell cover as well.

There are other recommendations in the study related to mask wearing and rehearsal environments. Indoor rehearsals, if they happen at all, should only last for 30 minutes, then break for a minimum of 20 minutes (depending on ventilation system); outdoor rehearsals should be for 30 minute intervals, with 5 minute breaks. More information will be forthcoming, but if you want to see the video from which I gained these insights to find out more and formulate your own conclusions, then here is the link:

When I posted this information on the IDRS facebook page it caused a bit of a sensation with over a hundred comments, and dozens of shares. I was particularly pleased to get a response from the oboist who participated in this study, Clayton Williams, a graduate student in oboe performance at the University of Colorado at Boulder, who says he played a Loree Royale 125 for the studies. Here’s what else he reported:

“Hi, I’m the oboe player doing these tests at CU. As shown I. The graph, we saw significant reduction in aerosol emissions with a good material bell cover (unfortunately they haven’t used that same material since and the panty hose really didn’t seem to help when we did the flow visualizations that were shared yesterday. I also did the same aerosol tests on flute and clarinet hoping that maybe I was a “super spreader” and that maybe I just had high numbers, but my numbers on other instruments matched those of the other tested individuals. We did see that it was specific notes that provided fast, far reaching air plumes in the flow visualizations. G# had the longest range and the most focused air emission while almost all right hand notes had large flows as well, just wider and more dispersed. It’s really very interesting actually. But it’s unfortunate for our instrument that this might keep programs from having oboe students this year.”

There is now a second study, released by the University of Minnesota Department of Mechanical Engineering, confirming that the oboe emits the highest amount of aerosols.