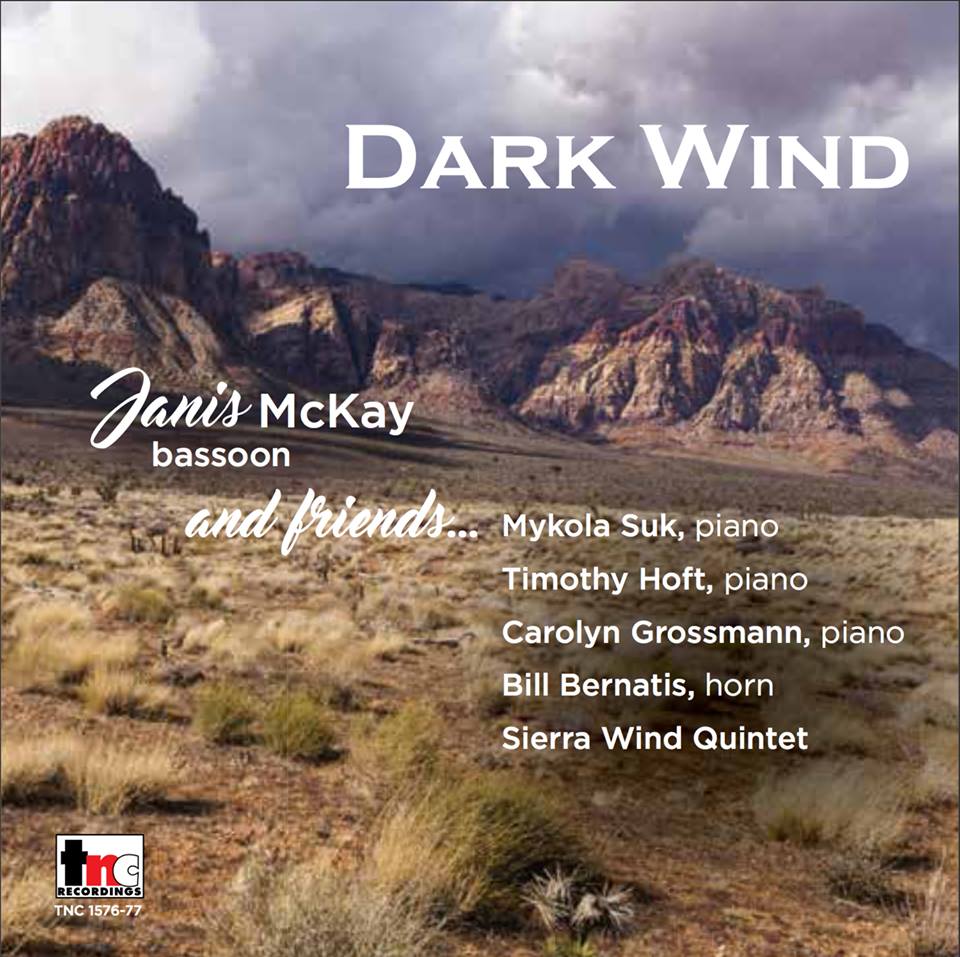 Janis McKay has released Dark Wind, a 2-CD set that brings together an eclectic mix of solo and chamber works for the bassoon. She gives first-rate performances of works by Tansman, Etler, Ewazen, Grossman, and Lesemann. In addition, the CD concludes with two unusual works for wind quintet, Instrumentos de Madera by Don Hannah and Dark Winds Rising by Phillip Kent Bimstein. I am glad I could join Janis in recording these works, especially since both were written for the Sierra Winds, the ensemble I managed and performed with for a couple of decades.

Don Hannah was Las Vegas’s top musical arranger from the 1960s-90s. Yes, he even wrote for Elvis! Don once told me that his biggest annual royalty check was from the arrangement he made for Big Band of the opening section of Richard Strauss’s Also Sprach Zarathustra, which was used to open Elvis’s show, both here in Vegas and on tour.

Don loved classical music. A tuba player, he frequently orchestrated arrangements for the Nevada Symphony, and was a regular audience member. I was so impressed with Don Hannah’s ear for orchestration that I asked him if he would consider writing for wind quintet. He was excited about the idea, so I secured funding from the Nevada Arts Council, and in 1992 the Sierra Winds premiered his Instrumentos de Madera. Inspired by Latin rhythms, this four-movement work explores the diverse colors of the ensemble with sections scored for alto flute, piccolo and English horn, and some Latin percussion added in as well. Enthusiastically received by our audiences, we took it on tour, eventually performing it in Washington D. C. at the Kennedy Center, as part of its twenty-fifth anniversary celebration.

Phillip Kent Bimstein’s Dark Winds Rising for wind quintet features the pre-recorded voices of the Jake family, members of a Kaibab Paiute tribe in Utah. Phillip interviewed them about a controversial struggle they had been involved in—whether to allow the construction of a toxic waste incinerator on sacred tribal lands. On the one hand, members of the Paiute community were tempted by the money they would make leasing the land. On the other hand, strong objections were raised against its construction for both historical and environmental reasons. Which side would win out in the end? Dark Winds Rising uses the words of the Jake family as a basis for the melodic and rhythmic inflections heard in the wind quintet. It tells the story of this family in a simple but powerful fashion. It was originally written for and recorded by the Turtle Island String Quartet, but I joked with the composer that a work with the title Dark Winds Rising really should be written for wind quintet! He agreed. Once again the Nevada Arts Council came to our aid and a new wind quintet was born.

Because of the success of this collaboration, Phillip Bimstein and Sierra Winds were awarded a major grant from the Meet the Composer Foundation that funded many other compositions, including a favorite of many oboe players, Half Moon at Checkerboard Mesa. A fantasy for oboe, crickets, frogs and coyotes, Halfmoon opens my solo recording A Tree in Your Ear, and has been featured on NPR’s All Things Considered. Additionally, this Meet the Composer grant resulted in another work for wind quintet, Casino, which is included on Starkland Records’ Larkin Gifford’s Harmonica.

Congratulations to my colleague Janis McKay on her wonderful CD project! I hope audiences all over the world will now enjoy hearing these new sounds.