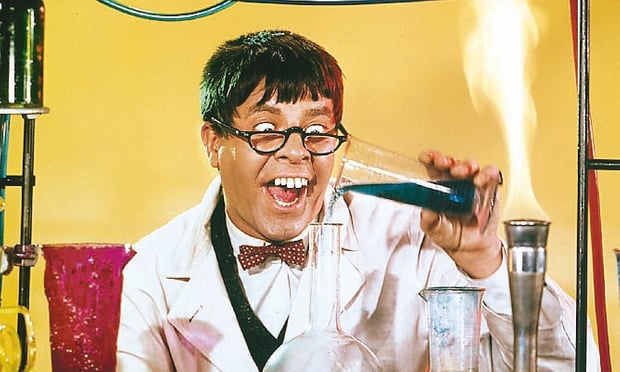 This was recorded to open the nationally televised Muscular Dystrophy Association Telethon (watching the Telethon used to be a Labor Day tradition shared by millions of Americans). I was told this was the first time they totally shut down one of the most famous intersections in the world, Las Vegas Boulevard at Tropicana Boulevard. However, in order to do this, the filming had to be done at 2 am. All traffic was diverted. Here was a full symphony orchestra and extensive tech crew, with Jerry Lewis conducting, on the Las Vegas Strip at two o’clock in the morning. As you might imagine, there were more than a few people walking by, doing double takes. Some thinking, “where am I?” Or else questioning whether they should have had that last drink! Some passersby started dancing to the music. It’s always a party in Vegas.

Jerry Lewis liked classical music, and was famous for doing his schtick with an orchestra. He treated us quite nicely, but I wouldn’t have wanted to be part of the camera crew! He threw a first class tantrum at them. I worked with him one other time just a few years later–Gershwin’s “Rhapsody in Blue,” with the great pop composer Michel LeGrand as the piano soloist–and once again he was nice towards musicians, but vicious to the tech crew. Even a clown has his dark side.

Which brings me to why I’m writing this blog. We each have a dark side. The oboe and English horn are instruments famous for their mournful quality. Think “Swan of Tuonelo,“ the slow movement of Tchaikovsky’s Fourth Symphony, or the beautiful English horn introduction to Judy Collins’s version of “Send in the Clowns.” We are sometimes caricatured for our doleful personalities (all oboe players seem to be familiar with underused words like “doleful” and “plangent”…). But I’ve had the pleasure of hanging out with oboe players all my life, and I know that there are all kinds. The stereotype is sometimes true, but oftentimes definitely not true.

Many different personality types are attracted to playing the oboe. And yet…It seems that a majority of all oboe players, when left alone in a practice room, will begin to connect with their dark side. No matter how sunny a disposition a musician might have otherwise, in the practice room, a Jekyll and Hyde transformation takes place: “even if I practice all night, I’ll never get better” “why can’t I be as good as….?” “why do I waste money on lessons when I sound this bad?” Some musicians tie themselves into emotional knots during a practice session. All this emotional stress is almost always accompanied by physical stress, as well. This physical stress often becomes muscular tension that can inhibit good technique. And if that isn’t bad enough, then pity the poor double reed player gouging, shaping, tying and scraping a reed! There are oboe players who move beautifully when playing the oboe, but have severe tension in their hands and arms anyway. Not because of the way they play the oboe, but because of what they do in the reed room. That small piece of cane can be unpredictable and nearly impossible to tame, so double reed players often experience a double dose of beating themselves up– in the practice room and in the reed room.

I encourage you to begin to notice your behavior when practicing and when making reeds. If you find yourself going to the dark side, then pause. Even if the slow strains of the Marcello concerto seem to be nudging you there, don’t give into those dark urges and negative thoughts! Instead, pause and ask yourself, “Is there a more productive way to fix this?” Take the time to begin developing creative strategies for improving that don’t involve self-flagellation! Notice how your body feels. Are you feeling muscular tension? Where is it? Does it need to be there? If it doesn’t need to be there, then can you release the tension? You may not completely erase the tension, but freeing up just a little can help. Often, just identifying the tension, and asking it to go away, can make a big difference, allowing you to play more expressively, or even allowing you to make better reeds.

Most of all: be kind to yourself. You like humor, don’t you? Everyone does. Then why not use humor to help you cope? Maybe you do already. If so, please share that humor with others. The oboe world could use a laugh.