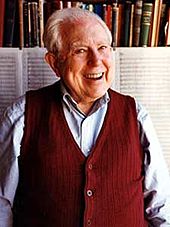 Elliott Carter, America’s esteemed composer, was born on this day, December 11th.  He lived from 1908-2012 and wrote wonderful music for oboe throughout his life. Thanks to his friendship with virtuoso Heinz Holliger, Carter wrote an Oboe Concerto and many other significant chamber works for oboe during his later years. But early in his career he was writing terrific music for oboe as well. His Eight Etudes and a Fantasy, written for woodwind quartet in 1949, is a watershed piece that is admired by composers and performers alike. Composers consider it a master class in composition with its advanced tonal language, klangfarbenmelodie, metric modulation and counterpoint. Performers fear and delight in its virtuosic and rhythmically intricate writing.

I recorded Eight Etudes and a Fantasy several years ago with the Sierra Winds (with Kristin Wolfe-Jensen playing bassoon). To prepare for this recording, the ensemble worked with flutist Doriot Anthony Dwyer, the pioneering principal flutist of the Boston Symphony Orchestra who had worked with Elliott Carter on many occasions. Etude #5 is especially challenging for oboists, as it begins with an expressive solo in the extreme upper register of the instrument, and ends with delicate playing in the lowest range. It’s a beautiful, haunting work however, and a fitting memorial to one of America’s greatest musical minds.