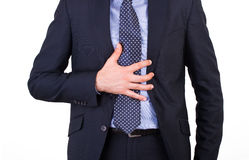 Yes, it’s true. Scientific research has proven that we oboe players burp more than other instrumental musicians. And, unfortunately, we have a higher incidence of heartburn as well. There is still speculation about why we need to avoid spicy foods more than others do– stress? back pressure?–but any oboe player experiencing frequent heartburn should take time to investigate exactly what the cause might be.

The authors of the study hypothesize that the reasons for this may be related to the extreme demands of breathing required for these two types of instruments, which “may ultimately impose variable physiological stresses including frequent contractions and relaxations of the diaphragm.” Flute playing requires a very high flow rate with low air pressure; double reed playing is at the opposite end of the spectrum with the least airflow, but very high air pressure.

Popping a Maalox or Tums tablet after a spicy meal or before bedtime may relieve heartburn symptoms, but if you are experiencing GERD (frequent heartburn, more than once a week), you should consult a medical doctor. Frequent heartburn may be a symptom of a variety of medical problems, and it’s important to figure out what the actual problem is. In most cases treatment is simple, but sometimes GERD can be a sign of something more serious, and may even require surgery.

Some of the serious complications that can result from untreated GERD are esophageal bleeding, ulcers, or chronic scarring of the esophagus. In rare cases it can cause a condition named “Barrett’s Esophagus,” which may lead to esophageal cancer. Barret etudes are good for oboe players, but Barrett’s Esophagus is not. It’s a strange condition in which the cells of the esophagus transform into cells that resemble the lining of the intestine. Yet another problem that may result from GERD is a hiatal hernia, although it is also understood that GERD can be a symptom of a pre-existing hiatal hernia. A hiatal hernia happens when part of the stomach slips past the diaphragm and begins squeezing the esophagus. Most people can live with hiatal hernias (and still play the oboe) but sometimes these become serious enough to require surgery.

Don’t be alarmed! As stated earlier, with a doctor’s supervision, heartburn can easily be controlled…although chest pains may still arise when “La Scala di Seta” is on your music stand. If it’s any consolation, a previous research study showed that Italian opera singers had a rate of heartburn similar to flute and oboe players. So next time you’re at a party, you can commiserate with your singer and flute player friends—but skip the beer and salsa!